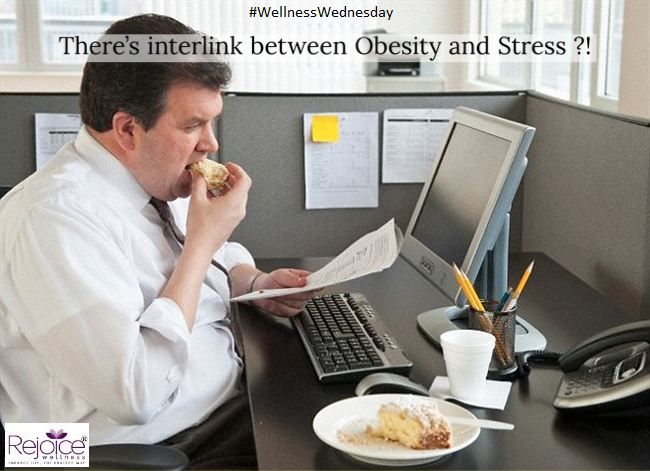 Obesity is multifactorial disorder. And stress is one of the key factor causing obesity.

Research has shown that stress can fuel obesity; stress has been linked to “comfort eating,” whereby individuals turn to foods high in fat and sugar in an attempt to make them feel better.

Researchers found that individuals who had persistently high levels of the “stress hormone” cortisol over long periods of time weighed more, had a higher body mass index (BMI), and a larger waist, compared with those who had low levels of the hormone.

Cortisol not only promotes weight gain, but it can also affect where you put on the weight. Researchers have shown that stress and elevated cortisol tend to cause fat deposition in the abdominal area rather than in the hips. This fat deposition has been referred to as “toxic fat,” since abdominal fat deposition is strongly correlated with the development of cardio-vascular disease, including heart attacks and strokes

The so-called “stress hormone” cortisol is released in the body during times of stress along with the hormones epinephrine and norepinephrine that constitute the “fight or flight” response to a perceived threat.

Cortisol has many actions in the body, and one ultimate goal of cortisol secretion is the provision of energy for the body. Cortisol stimulates fat and carbohydrate metabolism for fast energy, in addition to stimulating insulin release and maintenance of blood sugar levels. The end result of these actions is an increase in appetite. Therefore, chronic stress, or poorly managed stress, may lead to elevated cortisol levels that stimulate your appetite, with the end result being weight gain or difficulty losing unwanted pounds.

Stress is generally defined as a real or perceived threat to homeostasis. Although often thought of as a negative thing, the stress response is critical to survival, as its function is to help the organism adapt to challenge and maintain homeostasis. When one experiences acute stress (eg, a threat from a predator), the sympathetic branch of the autonomic nervous system (ANS) is rapidly activated, followed by the hypothalamic-pituitary-adrenal (HPA) axis.

In healthy individuals the stress response is short lived. Activation of the SNS is rapidly counterbalanced by the parasympathetic (“rest and digest”) branch of the ANS. The HPA response is terminated via negative feedback loops; glucocorticoids act on receptors at the level of the PVN and pituitary to inhibit the production and release of CRH and ACTH. Indirect negative feedback from limbic structures such as the medial prefrontal cortex and hippocampus also contributes to termination of the HPA axis response. Although the stress response is necessary for survival and adaptation, pathology can arise when it is prolonged. In vulnerable individuals, exposure to chronic stress can adversely affect numerous aspects of health.